Celebrating a decade with Robbie Wright

“You have no idea what heaven smells like until you walk into the warehouse when it is full of gummy bears,” said Robbie Wright. After 10 consecutive years at TVS, Robbie would know better than anyone what different aromas have filled the warehouse, especially since he has been filling the warehouse with a variety of different packages on numerous occasions.

Robbie works in Shipping and Receiving as a Material Handler but has worked many other jobs including the blending room, hanging bags, and on third shift in sanitation. Recently, Robbie has moved onto the second shift in shipping and receiving.

“Let me put it this way,” said Shipping and Receiving Warehouse Manager Shannon Merrill. “If he worked anywhere else he would be above expectations. He sets the bar high.”

A decade at TVS is not the entire story, Robbie first worked at TVS in the 90s. 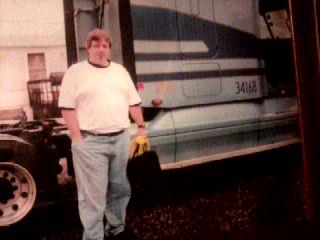 “He worked steady and hard and he quickly became someone we could all depend on,” said friend and former Warehouse Manager Deborah Hall. “Watching him grow into his job and role was so rewarding, but watching his growth as an individual was such a blessing. He came out of his shell and gained confidence in himself.”

COO Becky Alderman also remembers Robbie from his warehouse days describing him as a hard worker and dependable. “I first met Robbie when he was young,” Becky said. “He has always been an amazing employee. He is unfailingly polite and you can always count on him.”

In between his times at TVS, Robbie worked as an Over-the-Road (OTR) truck driver traveling across the United States. However, he was laid off in 2008 while home for the holidays.

“My favorite job at TVS is driving the truck,” said Robbie. “You work your butt off loading the truck and then you get in the truck and it is like your own little office with a radio and air conditioning.”

“Robbie is a good worker,” said friend and Material Handler Archie Harris. “He also likes to have a good time and joke around.”

Robbie has always had a reputation as a trickster. “I remember us all finding out Robbie had a sense of humor and that he could be a bit mischievous from time to time like hiding things from the warehouse manager,” Deborah said.

“I brought a shock pen to work one time,” said Robbie. “It was funny when people asked to use it.” Even Archie agreed saying, “it was funny to watch people jump when they got ahold of it.”

His jokes do not end there, they also include scaring his coworker and friend Jamie Rigsby with bats and a stink spray that smells like a bathroom. Other stories, that can not be listed here, are told with laughs and a smile.

All jokes aside, Robbie is described by peers as; loyal, quiet, head tough, and as being a gentle giant.

“He is a model of consistency and has an unwavering commitment to TVS that is simply remarkable,” CEO Jamie Brandenburg said.

“He hasn’t changed a bit over the years,” commented Archie. “You don’t have to ask him for help, he just jumps in and starts helping.”

Robbie has helped TVS grow and change over the past decade and he is ready for whatever TVS needs him to do, whether it is changing shifts or reorganizing the warehouse. Robbie said, “I do whatever I can; I am happy where I am at.”

With a chuckle, Robbie said, “I hope the new hires have their running shoes on if they are coming into shipping.” And if they come in work beside Robbie, this statement could not be any more accurate.